If a Chicken is Friendly and Other Thoughts

A Day at the Airport

Last Tuesday was one of those days. I had to drive to Logan airport in Boston to pick Kelsey up. Kelsey had a long weekend with Monday and Tuesday off school so she took the time to fly and visit her father in South Carolina. The airport in Providence or Hartford is much more convenient but with this being a popular week for winter break, the airlines jacked their prices up obscenely. Trans Air in Boston seemed the most reasonable way to go. When I had dropped Kelsey off the Friday before, I'd underestimated how long and difficult it would be to decipher the parking garage system at Logan and we were cut short on time. So I wanted to allow plenty of time to get there, park and be there waiting for my daughter who was flying for the first time by herself, too old now to be considered an unaccompanied minor and escorted by the airline through her connecting flight in Baltimore. Kelsey has flown many times with her brother and a few times as an official unaccompanied minor so she's not a novice, but she was a nervous 14-year-old. 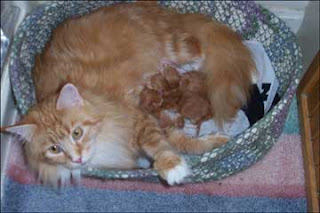 A young lady called the house last night, inquiring if this was the Dracoonfly Maine Coon place. I replied it was. She then asked where I was located so I told her the name of the town, spelling it out slowly at least 3 times. Her next question: What hours are you open? This was by no means the least clued-in person who has called about kittens, but it was the first where someone assumed I had store hours and could drop in and window shop for a kitten. I tried to be patient; this is my home, not a store. My kittens are almost always reserved in advance. They are born in my bedroom. Potential buyers must complete an application and be approved before I'll even put them on the waiting list. I tried, but I knew my explanations were useless. We ended the conversation 3 minutes later than I would've liked. Sometimes it just isn't worth the effort to explain.


Another misconception is that because the Maine Coon is a large, imposing-looking cat (or just because it's a cat), it is supposed to go outside. I actually had a man tell me years ago that he thought a Maine Coon would be the right breed for him because it was "big enough to handle the coyotes". To put it in monetary terms, why would a "cat lover" spend $800 plus on a kitten and then risk its life by allowing it to roam outside? Hey, I grew up in the time when cats lived outside and nobody got their cat "fixed". Unfortunately, most of our cats didn't make it past the age of four and many didn't even reach adulthood. Cats were disposable pets back then. I hope the time will come when all cat owners value their kitties enough to keep them safely indoors.


Other cat misconceptions:
Those are some of the myths and misconceptions I've encountered over the years. If anyone has any others (or "facts" they've always wondered about), feel free to comment or send them to me and I'll post it. 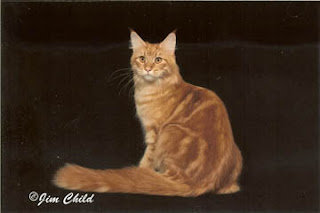 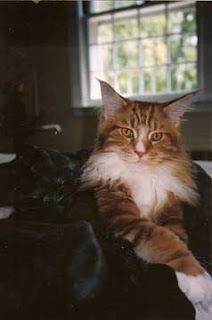 Hello! Mom and Dad just read your blog and were thoroughly surprised to find the story of my re-naming on there. They were just as delighted, however, to see my photo and to fondly recall that that's how I looked when they came to adopt me all those years ago. In fact, they're currently celebrating my sixth birthday - and making far too big a deal of it, if you ask me.

But my, how I've grown. I am enormous, in the most attractive way. Though Sadie has the biggest attitude I've ever come across, I trump her when it comes to sheer density (Editor's note: Sadie is Duncan's slightly older feline sister from another litter). Mom and Dad have been working for months now to regulate my diet, and I suppose I'm a little svelter than when they started, but the truth is this. I. LOVE. FOOD.

I also love Dad's music, and one of my favorite things to do is curl up in his guitar case (it's lined with the coolest purple fur!) while he's playing guitar. And I love sunshine and the dining room rug, and having my bedroom all to myself when Sadie is otherwise occupied.

Mom and Dad keep fawning over the fact that I'm six years old - I'm just yawning. I mean, what's in a number, anyway? Unless, of course, we're counting snacks (Feline Greenies rule!), in which case, I'm all over that kind of keeping score. As I alluded to earlier, they've gotten much stingier when it comes to kibbles and treats, but I'm inclined to make the best of a trying situation. After all, I've managed to co-exist with Sadie for all this time.

Well, I've got another nap to take, so I'll sign off - but not before wishing you, Jay and everyone at Dracoonfly a very happy weekend.


My reply to Duncan:

Well hello Birthday Boy! So good to hear from you! I love your note so much I'd like to use it for my next blog. I'd forgotten what a good writer you (and Sadie) are.

You know, one way to trim the pounds for kitties of your caliber is to eat less dry food (too many carbs) and eat more canned food. Do you like canned food? If so, then maybe Mom and Dad can mix a tablespoon of a special treat called Metamucil in it. It's yummy and will help you lose weight safely without feeling hungry.

I hope you had a wonderful birthday. BTW, Sadie's half-birthday is tomorrow...she'll be 6 1/2. Try to be a nice little brother. Give Sadie a headbutt for me and my best to your Mom and Dad.