I am a breeder and owner of the Maine Coon cat. It is a large breed, sought after originally because of its usefulness as a hearty barn cat who could survive the harsh winters in Maine and keep the rodent population under control. Throughout history, a cat’s main job for humankind has been that of mouse exterminator. Since its acceptance as a breed in the 70’s and growing popularity as a pet and show cat, many have speculated that the Maine Coon’s killer instincts have been bred out of it. 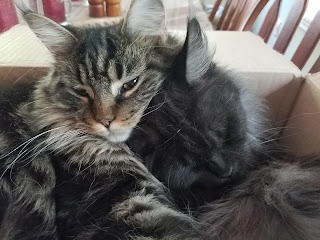 River snuggles with Tina
When I noticed that two of our younger female Maine Coons were focused on whatever was under our upright piano, I assumed a toy or perhaps a bug was under there. When I later heard our dog, Coraline, sniffing loudly around the base of the piano, I became suspicious and pulled the piano out away from the wall. An adorable little field mouse looked back at me.


Getting a live mouse out of the house when one has several predators around is a daunting task. I have witnessed our dogs brutally killing mice and song birds with one bite. I rolled the piano back in place to protect the mouse, put Cory in her crate and called my husband for assistance.
I was and am not concerned about finding a den of rodents as I’m pretty sure I know how it got in. We have an enclosed outdoor cat run connected to the house. The cats have access to the run via a cat door installed in the basement window. I occasionally find a rodent victim (vole or mouse) dead in the cat run.  While it is very unlikely a mouse could push the door open to gain entry, it could be carried inside via the mouth of a cat. A live mouse makes for some major feline entertainment. Before the cat and mouse games could get too far, the mouse likely escaped. All was well and good for the mouse until it realized it had fallen into mouse hell…a whole city of Maine Coon cats.


Back to the piano mouse. After my repeated calling, Jay showed up and I explained our dilemma. Once I reminded him that we were NOT to kill it, he suggested I get a towel to throw over the mouse when he moved the piano back. I got ready with my towel. From the other side of the piano, Jay moved it away from the wall. Simultaneously, one of my pottery vases fell from the top of the piano as I tossed the towel. The vase broke into a million pieces and the mouse jumped over the towel, running into the kitchen. Many expletives followed, including the declaration that I do not make a good exterminator.
It was determined that Mr. Mouse had crawled under the stove after I pulled the bottom drawer out and saw him back there. Now he had many opportunities to go behind the cabinets and hide indefinitely. This could take a while if he didn’t venture out. However, I wasn’t too worried as Tina, River, Valentine and Boom Boom were standing guard. I reminded Jay that if we heard a commotion in the middle of the night we had to get up so we could try to save the mouse before my feline forum did too much damage. Major eye roll from my husband.


“Hey, if I said, ‘let’s set traps and kill the mouse’, you’d suddenly wonder who you’d married,” I retorted. I am also the person who puts the errant moth and spider outside unharmed, so of course mice deserve the same protection in my animal-loving mind.
Luckily, we didn’t have to wait long. After watching the Olympics for a while, Jay went to the bathroom and I came into the kitchen to put my wine glass in the dishwasher. All the cats were gathered around the step stool in the kitchen. River, our 10-month-old brown tabby lay on the floor, casually watching as Valentine, Tina and Boom Boom crouched attentively beside the stool. Hmmm. Wonder what you guys are up to. I called repeatedly for Jay, but Lord knows he can’t hear me in an emergency.


I grabbed a large plastic cup and carefully lifted one side of the stool. Sure enough, Mr. Mouse ran out but right into River’s arms. She surprised me by not jumping up, but instead she welcomed the little guy as her new playmate, letting him hide between her front legs. With my cup positioned on the floor, I let the mouse choose between me or a bunch of cats. He ran into the cup and I had him. Fortunately for the mouse, he seemed unharmed. Before I let Mr. Mouse outside, I took a picture and warned him about not going too close to the chickens’ yard. Our chickens are major rodent killers. 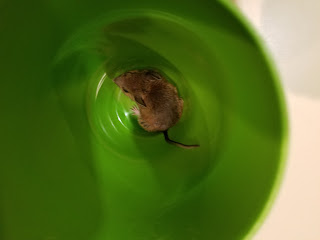