Since my recent blog, Feathering the Nest, was written about acquiring our six new chicks, we have already had an adventure.

I wanted to raise the new chicks in our old chicken coop. It's predator proof and surrounded by an 8-foot wire fence. Until the chicks get too big to fit through the holes in the wire, they would be kept in the coop. At night, the solid wood doors are locked tight and I set up a heat lamp to keep the temperature around 90 degrees. During the day it's warm enough (especially lately) for the lamp to be turned off, doors opened and a screen put across the front to keep the chicks contained safely in the coop but allow ventilation and some sun to get in. This was how we raised our chicks for the past two years, although then we had the advantage of two broody bantam hens who gladly assumed the role of mother and heat source. Boy, are we missing Beaker and Rihanna now.

The screen barrier I put in front of the coop is about thigh high, taller than the brooder the chicks' breeder kept them in. It doesn't reach all the way to the top of the door opening, leaving about four inches of uncovered space.

The second day after I'd moved the chicks into their new housing was a busy one. I'd invited our neighbors over for a barbeque supper, figuring I had a litter of Maine Coon kittens due the next day so Saturday should be better. However, the expectant mother, River, had other plans and started active labor Saturday morning. I had been suspicious as River had started meowing excessively and doing the nervous purring of early labor the evening before. Therefore, I'd put up the baby monitor and gotten up twice during the night to check on her. This was how my day started, tired, but happy that the kittens were on the way.

Three hours later, around noon, my knees were spent from kneeling into the kitten birthing area, but we had four healthy kittens. I went to check on the chicks outside; they seemed fine. All the babies secure, I left to pick up groceries for our planned barbeque.

I just needed a few items, but ran into someone who recognized me. You know when you realize you should know someone, but can't remember how? I stared at this woman while she talked, thinking, "Maybe she's a kitten buyer or maybe I know her from Ledyard school system." Finally, the woman mentioned her daughter's name and I realized her daughter and mine were good friends. In my defense, the last time I saw her was two years ago, but who am I kidding? I'm horrible at remembering names and faces. 45-minutes of catching up in Stop-n-Shop and now I was feeling rushed to get home and start food preparations.

Jay was home from his morning fishing excursion when I got home. I complained about losing time in the grocery store because I've never been good at getting out of conversations. We both went outside to shuck the corn into the compost pile. It was one of those sweltering heat wave days, somewhere around 95 degrees, 90 percent humidity. I wanted to shuck the corn quickly and get back in the house before I got too hot. I was already wearing what I planned on wearing when our guests got there, a pink sleeveless top and white capris pants and didn't want to ruin it by sweating.

While outside, I checked on the chicks. Of the six, three were missing! I was only gone about 2 hours. I crawled into the coop, trying to keep my knees off the ground to protect my pants and feeling under the space at the bottom...nothing but spiders. No signs of violence; no feathers, no blood. It's impossible for a large predator to get in. Jay started speculating that a large snake could have gotten in over the barrier. Snakes don't leave blood and body parts around since they swallow their food whole, something I appreciate when it comes to the mice in our shed.

My mind racing, I had already taken inventory of which chicks were missing; the two Cream Legbars, Punnett and Square, and one of the Blue Leghorns, either Bindy or Mindy. Then we realized, it's afternoon. Snakes are mostly nocturnal and it was unlikely more than one chick would have been taken. Somehow, the chicks got out and the only way out was for them to fly with their little wings over the 3-foot barrier and go through the fence. Placing the remaining three chicks in a smaller cage for safety, we started looking around. There is a large woodpile of about 5 cords behind the coop. Behind the woodpile is the woods which surround our property, woods in which lurk foxes, coyotes, owls, hawks, raccoons...all of which would enjoy the occasional chicken nugget.

Then, about twenty feet away, we heard peeping! The chicks were together under a large boulder at the edge of the woods. Good for us, chicks peep when they're distraught. Bad for the chicks if we were predators. I was so relieved, but then we had to catch them. They scampered like mice under the cave the boulder created, through a hole to the other side. One ran under the pallets that supported the wood pile back to the coop. In the end, it took about an hour of Jay and I crawling on our hands and knees in the poison ivy and sticks, putting our hands into creepy spaces, carrying another chick around so she'd peep and inspire someone to answer, our dog giving us a scare when she lunged for a chick, utilizing a kid's butterfly net and a fishing net, all before we finally caught all three escapees. Did I mention it was hot? Indentations on my knees from the kneeling in the brush, sweat pouring, capris pants white no more, but we had six chicks once again, exhausted but safe.

Taking no more chances, the chicks are now caged in the guest room until they are bigger and wiser. 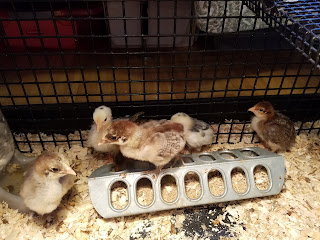 We have 13 backyard chickens, three of whom are roosters. All but three of the ten hens have gone "henopausal," meaning they are done laying eggs and are living out their lives in guaranteed retirement with us. Our youngest hens are two-years-old, the oldest is nine. In other words, we have a bunch of free-loaders.

Tired of begging, lecturing and threatening the hens, I ordered some new female chicks, a.k.a. pullets, from The Hatching House in Canterbury. As it so happened, my good friend Jo-Ann was visiting for a couple of days and went with me to pick up my new babies. The breeder was very knowledgable, so I enjoyed picking her brain about color and breed genetics while Jo-Ann channeled my daughter, "Oooh! Look at that one! It's so pretty! Get that one! They're so cute! Can we get this one?"

I ended up getting the four pullets I ordered, two Cream Legbars and two 55 Flowery Hens as those two breeds are auto-sexing, meaning the genders can be easily be visually identified by colors or markings at birth. Thus, the breeder could be certain of selling me females. I also purchased two Blue Leghorns (yes, of Warner Brothers' Foghorn fame), who may or may not be both female. This because Jo-Ann liked the spots on their heads and also, because I had been so desperate for eggs lately, I had considered getting a breed that is known for exceptional egg production. The Leghorn chicken (commonly seen in white) is used by most factory farms for egg and meat production. The breeder promised that if any of the Leghorns turned out to be roosters, she'd take them back and has a 75% success rate of rehoming roos. That's what I needed to hear. Three roosters is already too many.

On the drive home in a torrential downpour, Jo-Ann sat with the chicks in their cage in her lap and helped me name them. I typically try to name chickens of the same breed "twin names" or ones that go together, i.e. Righty and Tighty, Ann Landers and Dear Abby, Crabby and Patty, Addy and Subtracty, etc. The Cream Legbars are a breed developed in part by geneticist Reginal C. Punnett in order to sex the chicks easily at birth. I frequently use Punnett's Square method to try to determine what color combinations I may get from my Maine Coons, so I was really attracted to this breed. Therefore, the Legbar chicks are named "Punnett" and "Square," in honor of their creator. 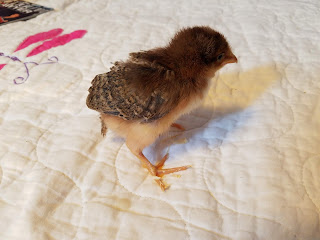 The two 55 Flowery girls, also gender determined by color, should grow up to be multi-colored. Their names are Pansy and Petunia. 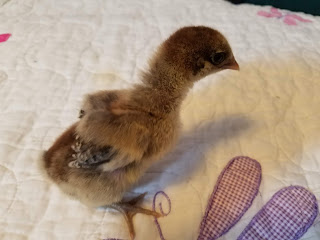 The Leghorns are named Bindi and Mindi. Jo-Ann came up with this as she knew Bindi is the name of the dot worn on the foreheads of Hindu women. Otherwise, they would have been called something more common like "Spot" and "Dot." Feathers crossed that Bindi and Mindi will never crow. 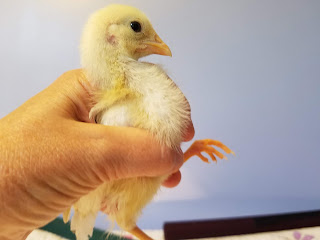 For Part 2 about the newest additions, read Flying the Coop.
﻿
Posted by Sharon Stegall 1 comment:

So you’ve decided you want take the plunge and get a purebred, registered, bona fide Maine Coon from a good breeder…awesome! Here are some suggestions on how and where to look.


·      Cat show calendars for shows near you can be found on TICA.org & CFA.org


·      Be persistent and patient. Maine Coon cats are extremely popular and breeders are usually swamped with inquiries.


Basic Criteria for a Responsible Breeder:


·      Registered cattery with a major cat registry such as TICA, CFA or CFF.


·      Screen breeding cats for heart disease (HCM) utilizing ultrasound, not DNA only. Proof of cardiac screening of the kitten’s parents should be available.


·      Kitten/cat should be registered. You may be required to provide proof of spay/neuter as a prerequisite.


·      Kittens not allowed to leave the breeder until at least 12 weeks of age and two sets of vaccination received.


·      Expect to sign a contract for the purchase of the kitten/cat which offers a health guarantee, prohibits declawing, letting your cat outside and breeding without permission.


·      The area where the kittens and cats live should be clean and the cats appear healthy and friendly.


·      Expect to be able to meet your kitten’s littermates and parents (unless an outside stud was used). Be wary of being asked to sit in one location while your kitten is brought out of another room to you.


·      No responsible breeder will sell their kittens at a pet store or through a third party. We like to know where our kittens are going! 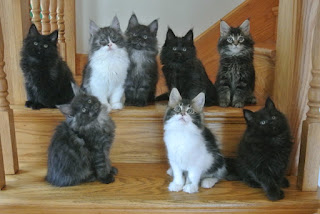