What Would You Do?

I distinctly remember my denial of the price of gas rising over three dollars per gallon years ago. I stopped the pump when my total reached exactly $39.99 because I refused to pay over $40 to fill my tank. Oh, those were the days! 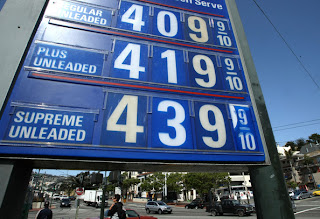 This past Friday, I drove to a friend’s house in upstate New York for a girl’s night at her place, over a three hour drive for me. As I knew gas was cheaper just about any place outside of Connecticut, I planned on filling up in Massachusetts. Once on the Mass Turnpike, the service areas and exits are about 20 miles apart with a whole lot of trees in-between. I pulled into a service area complete with McDonald’s, restrooms and gas pumps, everything a person could need all in one place. The two gas islands were occupied with cars that also had their gas tanks on the same side as my mini-van. Rather than wait in line, I thought I’d see if the hose could reach around my vehicle from its off (right) side.

I pulled forward and parked to the right, popped the door to my gas tank and got out. Nope, it wasn’t going to reach and I couldn’t turn around to get to the back of the line without violating the one-way rule of traffic. Disgusted, I decided I’d just have to drive the 22 miles to the next service area. As I sped up on the acceleration lane, I glanced at my side-view mirror and realized the little door that covers my gas cap was still open. Not in a position to pull over safely and knowing the gas cap itself was still intact, I kept going.

Then I had this vision of well-meaning passengers in passing cars on the highway trying to tell me that my gas tank was open. They would be going too fast to see the cap, just see the opened door, and honk, wave or point to get my attention. I anticipated waving back to thank them, “I know it’s open. Thanks. I’ll get it at the next exit.” Five cars passed me and nobody tried to communicate with me. My mood went from irritated that I’d have to deal with good Samaritans to pretended annoyance that no one cared enough to communicate. “If this were What Would You Do?, you people would fail!” I chastised out loud to no one in particular.

When I reached the next service area, my gas tank was in a more desperate situation and I happily found an open space at the pump on the left side of my car. As I started to remove my gas cap, I was taken aback by a woman who came around the back of my car and started talking to me. She said she needed money for gas so she could get home to Saratoga. She was only asking people for a couple of dollars as she didn’t feel comfortable asking for more. My initial reaction was of suspicion. I normally don’t contribute to beggars.

The woman looked to be in her thirties or forties, wearing a long dress and her red hair in two long braids. I did not detect a smell of alcohol or body odor. I decided to give her a couple of bucks, if no reason other than to get rid of her. I only had one single in my wallet. Amazingly enough, the rest of the bills were $10 and higher; obviously my husband and daughter hadn’t used my wallet as an ATM recently. I gave the woman the one single I had and watched as she approached others at the pumps. The man behind me with the New Jersey plates pulled out a wad of bills and peeled something off for her, but I didn’t see the amount. She approached others at the pump, but I couldn’t hear or see their responses.

As my tank filled, I continued to watch the woman while she made the rounds. She returned to her car which was at the pump island opposite me and just stood there looking out at the people pumping gas; apparently there wasn’t enough to fill her tank and she needed new candidates to approach. I wondered if this was a scam, but with her car sitting there, it was looking more legitimate.

Again, I thought of the TV show What Would You Do? Pretty sure that John Quinones wouldn’t bring a camera crew this far away from civilization, I didn’t look too hard for hidden cameras or mic packs. I felt I had to do more. I pulled my van up out of the way, got out and walked up to the woman standing beside her car, handing her a ten dollar bill. Once I got up closer to her car, I saw a man asleep in the passenger seat and a baby in a car seat in back.

I began to doubt my gift as I drove away. Why wasn’t the man doing anything? Why would he leave his wife to beg for gas money? Was he really asleep or was this part of a scam? I’ll never know for sure. The man and the baby were African American and I wondered if the woman was acting on the belief that their chances were better at soliciting funds if the clean-cut, red-headed white woman was the solicitor.

Having watched a similar scenario on the TV show where people of different genders, races and styles of dress ask for gas money, the producers asked if the difference in people’s contributions were due to race. Race wasn’t the issue with me, but gender and age are definite considerations; if an African American or Hispanic woman approached me in a similar manner, I would have felt the same way. It was a matter of a woman (me) feeling safe with a stranger and fairly certain that I wasn’t being taken advantage of. Broad daylight with others around helped the stranger’s predicament.

I realize that begging for gas money at the pump probably happens more often than I know, but this was my first experience. Would I do it again? Yeah, probably. I don’t have a lot of extra money floating around, but I did have enough fuel in my car to get where I was going.

So I have to ask my readers: What would you do?