I've been doing early spay/neuter “speuter” on my kittens sold as pets since the fall of 2005 and have no regrets. This means that I have my vet spay the female kittens and neuter the males before they leave my home at around 12 weeks old. I researched the pros and cons for a couple of years and before finding the right vet. I utilize Dr. Pamela Mills of Meadowhill Veterinary Shoppe in Lebanon, CT who was recommended by a breeder of Turkish Vans and Persians who did early spay/neuter on her kittens. I figured if Dr. Mills could handle the small, flat-nosed Persian kittens, my big kittens with their “real noses” would be easy.

Early spay/neuter is defined as surgically altering before the age of sexual maturity. That occurs later in life for the Maine Coon, normally after 9 months old for my cats. Most breeders and veterinarians on the east coast recommend having it done between 6 and 8 months of age, depending upon the gender of the animal. So in essence, if you get your cat speutered by 8 months, it has been “early altered” according to the strict definition. As of the date of this post, I estimate I've had over 80 kittens surgically altered by the age of 11 weeks and have had 100% success. No complications, no deaths, and no related health issues later in life. Dr. Mills requires them to weigh over 2 lbs for the surgery which isn't normally a problem for a Maine Coon kitten. Breeders of the smaller types of cats will wait about a month longer before have their kittens speutered, holding onto them later before letting them go to their new homes.

I take the litter to the vet in the morning and pick them all up in the afternoon/evening. My vet uses glue on the girls so there are no stitches to remove. The girls sometimes develop a bulge at the site due to fluid. It goes away after a couple of weeks. The female kittens do SOOOO much better with s/n than an older cat. My older girls that I retire don't want to move for a couple of days after a spay because they are so sore that I sometimes give them a prescribed pain killer. The kittens are jumping around like monkeys the same day or by the next day at the latest. Since my vet is so reasonable with the cost, it usually saves the kitten buyer money.

Our job as breeders is to preserve and protect the Maine Coon cat. When I first started breeding, I did what many cat breeders did regarding the spay/neuter of the kittens sold as pets; I had an agreement signed by the kitten buyer which stipulated that after I received notification from their vet that the surgery had been performed, I would send in their kitten’s registration paperwork. This works out in most cases, however, I have met several people who claimed they got their pedigreed cat from someone who wasn’t supposed to breed, but did anyway. In short, people don’t always tell the truth about their intentions.

Most good breeders are very conscientious about not contributing to the overpopulation of cats. We also want to protect our cats from being bred to other cats which have not had any health screening done. I don’t want a kitten I sold associated with a Backyard Breeder (BYB) who would breed it to a non-Maine Coon or a Maine Coon that has a history of heart disease in its lineage. Before I did early spay/neuter, I always worried most about the girl kittens being bred and had a few cases where I had to hound the kitten buyer to get it done. People generally are better at making sure their male kitten is neutered out of fear that he’ll start spraying. Little do they know that the girls can be worse! Now, I normally have the kitten's registration pre-paid and printed out when the kitten is picked up. Then the kitten buyer fills in their part and I mail all the registration forms in together. This way I KNOW all of my kittens have been speutered and registered and I don't have to track people down later.

Another argument supporting the surgery being done by my vet is that I feel the kitten is less likely to be subjected to declawing when in its new home.  Although more people understand these days that declawing is considered inhumane because the toes are amputated up to the first knuckle as well as the claws, some veterinarians will offer to declaw at the same time the cat is being spayed or neutered.  My contract forbids declawing, but I think the owner is less likely to go against my requirements and have a separate surgery done if their pet has already been speutered.

I have had some kitten buyers question the safety of early speutering and will refer them to the study on the CFA/Winn Feline sites link on my website Links page. The study followed 3 groups of kittens spayed/neutered at different ages, comparing and contrasting the effects of the surgery.


In sum, my arguments for doing early spay/neuter are:

It also helps a lot that my vet is reasonably priced and willing to do it. In my opinion, that's what really keeps most breeders from doing it even though they may give other excuses. Many vets (esp. in NYC and NJ) charge $200 plus to neuter a male cat and $400 to spay a female so it's just too cost prohibitive to speuter a whole litter. I originally started early spay/neuter on a trial basis and can't imagine going back to the old way. It may not work for every breeder, but it works for me. 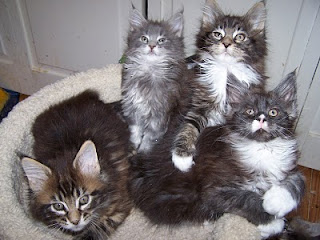